The Benefits of Karate Training 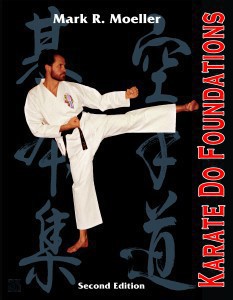 From Karate-do Foundations, by Mark Moeller:

Before beginning the technical portion of this book, I want to share some of the benefits that I have derived from my karate-do training.  In particular, I want to discuss some of the non-martial benefits.  Most people realize that karate training effectively teaches people how to defend themselves, but many are unaware of the other skills and abilities that are developed.  These other skills and abilities enhance the martial effectiveness of the practitioner’s karate.  They also provide the practitioner with the inner resources and skills to succeed in other areas of life.

The principles that I have learned from my teachers and my karate training have taught me how to achieve success in karate and in life.  I have learned how to set realistic goals, how to develop the necessary self-discipline to follow through on these goals, and how to maintain the most productive attitude while working towards these goals.  These principles are a very effective and efficient way to successfully accomplish any goal.

The practice of karate has also greatly increased my ability to concentrate and has taught me how to focus my mental and physical energy.  I have also learned the importance of practicing something over and over until it is learned.  By applying these principles in my karate training and in my life, my self-confidence has increased and I have done things I never dreamed possible.

This has not been an easy process.  With respect to karate, it has required hundreds of thousands of hours of repetitions and practice.  With respect to other areas of my life, it has often required an equivalent amount of hard work and patience.  My efforts have been rewarded, however, and I have successfully achieved many of my goals in life.  There are other goals that I am still working on, but I continue to apply these principles and am confident that I will eventually succeed.  The following describes how I discovered and applied these principles in my karate training.

I was a slow learner when it came to karate.  In high school, I was a fairly talented athlete.  I played on my school’s football, basketball, baseball, and tennis teams.  Although I was never a superstar, I was generally a starter.  Nevertheless, when I started studying karate at the University of Michigan Shorin Ryu Karate-do Club in January of 1979, I found that I had great difficulty getting my body to properly execute the techniques and exercises I learned in class.  In fact, I frequently had to ask the other students to slow down just so I could do the two-person exercises.  Because of the caliber of person the class attracted, the other students were always very helpful and supportive.

I soon realized that just attending the two classes offered each week was not enough for me to learn karate.  I decided I would try to practice at least once every weekend.  I began doing this and found that the extra practice helped considerably.  Although there was not a dramatic improvement in my ability to do karate, I was encouraged by the results of this extra practice.  In small increments, I gradually increased the number of practice sessions until I was practicing every day for one to two hours (with only an occasional day missed).

Despite my daily practice, however, I was still one of the slowest learners in the class.  At the end of that first semester, twelve out of the fifteen students in the class tested for their first promotion.  I was one of the three students who was not asked to test.  (In many traditional martial arts schools, a student cannot test for a promotion until asked by the Sensei.  It is considered improper and disrespectful to ask to test.  When the Sensei feels a student is ready, the student is invited to test for promotion.)

I wanted to learn karate, however, so I did not allow myself to get frustrated and upset.  Instead, I persevered and continued my daily practice.  Within six months, I tested and received my first promotion.  It is interesting to note that within one year all twelve of the students who participated in that first test were no longer training and the three of us who did not participate all went on to get our black belts.

In this process, I discovered that if I practiced a particular technique or exercise enough times, I would eventually learn how to do it correctly.  From that point on, I continued to train daily (with only occasional days missed) for the next eight years, sometimes training for as many as eight hours a day.  Consistent practice and multiple repetitions have been, and continue to be, two of the keys to my success in karate.

Although I was not conscious of this at the time, I later realized that I had learned how to work toward achieving any goal and how to apply the principles of effective goal setting.  I started with a clear picture of the end result I wanted to achieve (my ultimate goal was to earn a black belt in karate).  I then established an intermediate goal that would move me closer to achieving my ultimate goal.  This intermediate goal was specific and realistic. It also contained a component that was capable of being “measured” so I could determine whether I had successfully completed it (as described above, my first intermediate goal was to practice at least once every weekend).

After I successfully achieved my first intermediate goal, I revised that goal and set another intermediate goal that would move me closer to achieving my ultimate goal (I increased the number of weekly practice sessions and created subgoals to determine which exercises to practice during those sessions).  I continued to repeat this process of setting realistic goals, working hard to achieve them, and then revising them, over and over again.  I persevered and continued working even during times when it looked like I might never achieve my ultimate goal.

My perseverance paid off.  Gradually, I became more and more proficient in karate and eventually earned my black belt.  The black belt I was presented originally belonged to Scott Sensei.  He presented it to Sandweiss Sensei immediately before leaving for extended martial arts training in California when Sandweiss Sensei was to be the Acting Head Instructor while he was gone.  At the time, he told Sandweiss Sensei that it was a “Head Instructor’s Belt” and that he should wear it until he had the right student to pass it on to.  I feel very honored that I was the one chosen to receive this belt.  I received the same instructions about the belt and passed it on when the right student earned it.  In the process, I also revised my original ultimate goal to include training for the rest of my life and sharing Okinawan Karate-do with others.

Because perseverance is both the most important and the most difficult aspect of achieving one’s goals, I want to share my insights on the attitude one should maintain when working towards the achievement of any goal.  Mental and physical energy should not be wasted worrying about the end result, the rate of progress, or the proficiency level or successes of others.  Rather, the mind and all of one’s energy should be focused on doing those things that are necessary to achieve the goal.  This is both effective and efficient.  It also leads to greater peace of mind and internal harmony because one knows that he or she is on the path to success and is doing all that can be done.  In my opinion, this is the most productive attitude that one can have when working towards the achievement of any goal.

For example, I wanted to learn how to do a middle block during the first semester of my karate training.  Instead of focusing on the block itself and my inability to do it properly, I focused my mind and energy on practicing the block.  I did not worry about how fast I was progressing or how I compared to the other students.  How fast I was progressing was not in my control.  What I could control was the number of repetitions I did and how hard I tried during each repetition.  I started by doing ten blocks each day and gradually increased the number of repetitions until I reached the maximum number I could complete in my allotted practice time.  During each repetition, I concentrated on executing the block to the best of my ability.  Gradually over time, I learned how to do a good middle block.  I then reduced the number of repetitions to a “maintenance” level and chose a different technique to practice.  Gradually over time, I learned the required techniques and exercises of karate.

In addition to enabling me to learn faster and more efficiently, focusing on the number of repetitions and the quality of each repetition (instead of the rate of progress or my proficiency compared to others) also prevented me from getting frustrated with myself.  This is not to say that there were not times when I wished I was learning faster, but at least I knew that I was on the correct pathway.  I was doing everything I could to insure that I learned the techniques.  This is the attitude or mental outlook that one should maintain when working towards the achievement of any goal.

The study of karate has also improved my self-confidence.  My increased confidence is a result of the self-defense skills I have learned and the improvement I have witnessed in myself.  I feel good about myself and what I have accomplished in my life.  I know I have the inner resources and skills to meet the challenges that life throws at me and the courage to attempt things that seem unattainable at first.  I have found that many of these things eventually turn out to be not only attainable, but also worth the effort to attain them.

At Atlanta’s Traditional Okinawan Karate-Do Dojo, we LOVE karate and LOVE to teach it! Whether you’re a beginner or at an experienced level, we guarantee you’ll have a great time! Want to learn self-defense, self-confidence or how to control your body, we encourage you to sign up for a class. If you have any questions or would like more information, contact us today!