Karate was traditionally a form of self-defense taught only to family members and the Royal Guard.  It originated in the Ryukyu Islands, located between the southern-most Japanese island of Kyushu, to the north, and Taiwan, to the south.  The largest of these islands is Okinawa.  Karate is believed to have evolved from martial arts forms developed at the Shaolin Temple in China.  Many centuries ago, these forms were transplanted from the Fukien Province of China to the Ryukyu Islands, where they were modified to suit the Ryukyuans’ needs.

The Japanese characters for karate originally meant “China Hand”.  In 1933, a board of senior karate masters changed the characters for “karate” to those for “Empty Hand.”  The pronunciation remained the same.  This concept of the Empty Hand goes far beyond any simple meaning such as weaponless fighting.  It emphasizes the Japanese concept of muga-mushin or “no-mind”, in which a person does not have any preconceived notions which hinder the  ability to learn or react.  This idea is extremely important in the application of techniques in a combat situation.  As a vehicle for learning, it allows the student to absorb information more quickly and at a much deeper level.  This concept is often associated with the Zen notion of “Beginner’s Mind.”  The character do (which comes from the Chinese Tao) means the “Way” or “Path” which one follows through life. Therefore, Karate-do means “The Way of the Empty Hand.”

Practice in Karate-do involves both defensive and counter-attacking methods, with emphasis on striking and kicking techniques.  Drills include exercises with partners, individual drills, and solo forms called kata.  Our curriculum is structured in a set progression which allows the student to develop in an efficient and safe manner. 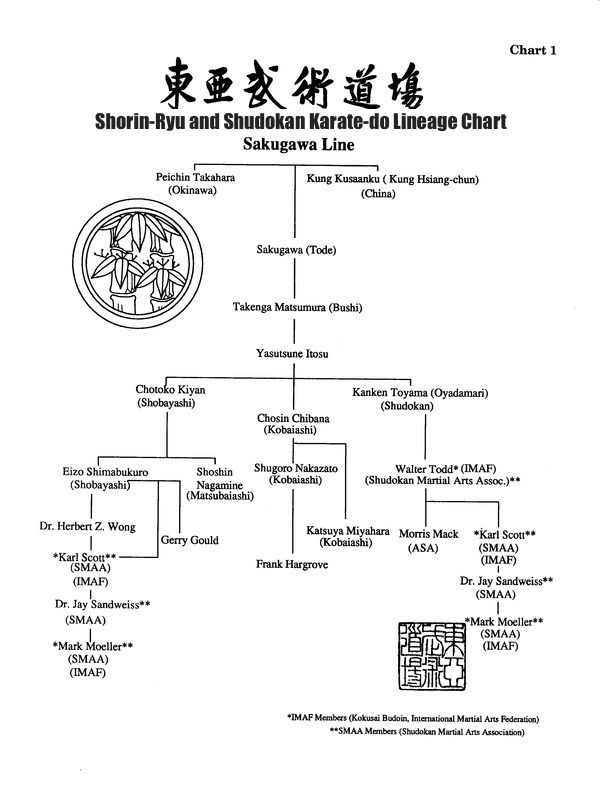 Shorin Ryu Karate-do is one of the two main styles of Okinawan Karate-do.  It incorporates blocking, striking, kicking, locking, throwing, and moving techniques. Shorin is the Japanese pronunciation of characters for the word Shaolin, the ancient Chinese temple, and Ryu means “school” or “style”.  Shorin Ryu Karate-do therefore means “The Shaolin System of the Way of the Empty Hand”.

Karate was largely practiced in secret and passed down through families until Yasutsune Itosu expanded its influence.  Itosu is credited with bringing karate out from secret training areas and into the public around the beginning of the 20th century.  He redesigned basic techniques and formulated exercises and forms so that the general public and larger groups might be able to learn karate more effectively.

Shobayashi-Ryu, the oldest and most orthodox school of Shorin Ryu, was founded by Chotoku Kiyan, who had been a student of Itosu.  Our teaching lineage traces back to Kiyan, Itosu, and the other founding masters of Okinawan Karate-do.  Training includes conditioning and developmental exercises, movement drills, graduated two-person exercises, Kata (formal exercises), and in more advanced training (adults only), instruction in classical weapons of our system.  The Shorin Ryu practitioner develops rooted stances, quick stepping motions, and explosive jackhammer-like punches and kicks.

Shudokan Karate-do was taken to Japan from Okinawa by Kanken Toyama.  Toyama was a well-known instructor who was awarded the status of “Karate Master” by the Japanese government.  His school was called the Shudokan, meaning “The Institute for the Cultivation of the Way”, and the name became associated with his karate system.

Shudokan is a composite system encompassing all the major Okinawan styles, certain Chinese systems, and Kobujutsu (“Ancient Arts”).  There are also Kata unique to Shudokan, which are characterized by large, circular motions with an emphasis on covering.  The power that is generated by these motions can be compared to the power of waves crashing on a beach.  The practice of large, extended motions develops power and physique.  The Shudokan practitioner develops both internal and external power – a balance that leads to good health and overall development.